Cadets Alexander Stastny and Geri Ronsley have earned the Wright Brothers Award and the accompanying promotion to Cadet Staff Sargent.

Stastny and Ronsley both earned the Wright Brothers Award, which is awarded for successfully completing the Phase I of the Civil Air Patrol cadet program. It marks the transition of a cadet to the non-commissioned officer status in the Civil Air Patrol cadet program, and accompanies promotion to the grade of Cadet Staff Sergeant. With their promotions, Stastny and Ronsley join cadets J.R. Wandell, Niko Medrano and Colton Kiser in carrying out the duties of the NCO corps.

NCOs must show by example that they are truly committed to integrity, service, excellence, and respect. They are charged with demonstrating superb military bearing, respect for authority, and the highest standards of dress and appearance. The NCO is a first-line supervisor, someone who ensures the junior members of a team accomplish the mission. To do that, they generously share their experience and knowledge. Although NCOs are leaders by virtue of their seniority, they still have bosses of their own. NCOs backup their leaders by enthusiastically supporting, explaining, and promoting their leaders’ decisions.

Leadership training is just one of the many activities undertaken by the Civil Air Patrol. Young people are also given instruction in STEM and Aerospace. Adult members are given opportunities for professional development in a wide array of specialty tracks. All members are trained to assist their communities in the event of emergencies. For more information about the Saline County Composite Squadron, visit www.mo117.org or attend one of their meetings. The group meets from 9 to 11:30 a.m. Saturdays at the Marshall Municipal Airport.

This entry was posted on December 9, 2017 by Chris Post in Cadet Programs and tagged promotion, Wright Brothers. 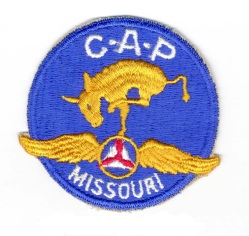